The much-trumpeted wine benefits may not be as great as we thought. A new study published in the Diabetic Medicine Journal revealed that among patients with type 2 diabetes, moderate alcohol consumption was associated with an increased risk of vision deterioration. Then, if wine benefits are questionable, shouldn’t we just concentrate on eating grapes to obtain the antioxidant benefits of this fruit?

In studies conducted in 1992, it was observed that in southern France, mortality rates from heart disease were lower than expected despite the consumption of diets high in saturated fat. Researchers attributed the impressive low incidence of heart disease, 50 percent lower than in the United States, to the consumption of red wine. Since then, the possibility that drinking red wine might protect our heart arteries has made the topic “wine and health” extremely popular. In fact, research has shown that taken in moderation -two 8 ounces glasses for men and 1 glass for women per day, red wine may increase HDL cholesterol, the “good” guy, decrease LDL cholesterol, the “bad” one, prevent oxidation of LDL, and scavenge free radicals.

What is the secret in Red Wine?

Since the discovery of the “French Paradox” puzzle in 1992, researchers have been trying to pinpoint why red wine has a cardiovascular protective effect. While studies have been focusing on the antioxidant properties of red wine, evidence suggests other mechanisms by which it might be beneficial for our health. Research points toward a family of substances called polyphenols that are found in plants and are abundant in grapes. Polyphenols are part of a larger family known as phytochemicals.

Phytochemicals: Medicine of the future

The word “Phyto” means “plant” in Greek. Phytochemicals are nonnutritive chemicals found in plants that protect us against diseases. Many fruits and vegetables contain a wide variety of phytochemicals; in fact, researchers have identified by now more than 900 different phytochemicals in foods and they are not done yet, since every day they discover new ones. It is estimated that there may be more than 100 different phytochemicals in just one serving of fruit or vegetables. Studies have long shown that phytochemicals are present in plants to protect them, but only recently we have learned that they are also crucial in protecting humans against diseases. We know that people who consume plant foods regularly have a lower incidence of heart disease than people who do not include them in their diet.

How can phenol-phytochemicals protect our arteries?

Polyphenols can protect our arteries through the following mechanisms:

White wines have shown the ability to prevent the oxidation of LDL but generally are not as effective as red wines. The polyphenol content of red wine can be about 20 times higher than in white wine and it has been observed in several studies that the antioxidant potential of red wine is six to ten times higher than white wine. About eight times more of white wine is required to produce an effect equal to red wine on preventing the oxidation of LDL cholesterol. Three factors account for these results:

Wine or Grapes for healthy?

If the polyphenols in grapes are mostly in the skins, can we just have red grapes or red grape juice, which is also made with the grape skins, and obtain the same beneficial effects as drinking red wine? Yes, we can, researchers tell us.

The researchers concluded that grape juice or non-alcoholic red wine is an excellent alternative to red wine when it comes to the disease of the arteries.

A word of Caution

Although past research has shown that in the absence of contraindications, moderate red wine drinking, two 8 ounces glasses for men and 1 glass for women per day, may be beneficial to patients who have a cardiovascular condition, those health effects disappear very fast even with moderate drinking. This may explain the serious health effects of drinking wine as in the case of eye deterioration for people with type 2 diabetes.

And since studies have indicated that most of the beneficial effects of drinking red wine are attributable to the polyphenols present in grapes, we may conclude that a diet that includes grapes, as well as other fruits and vegetables containing polyphenols, may be even more beneficial. 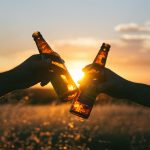 How Diabetics Can Prevent Low Blood Sugar when Drinking Alcohol 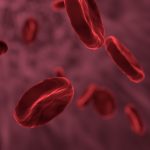